TITLIS is a mountain of the Uri Alps, located on the border between the cantons of Obwalden and Bern. At 3,238 metres above sea level, it is the highest summit of the range north of the Susten Pass, between the Bernese Oberland and Central Switzerland.

TITLIS Rotair – the world’s first revolving cable car! The TITLIS Rotair cable car rotates its way up towards the snow-covered summit of TITLIS. The world’s first revolving cable car transports you from the middle station at Stand up to the summit station at 3,020 metres above sea-level. The cable car revolves 360 degrees during the five-minute trip, treating you to idyllic panoramic views of steep rock faces, deep crevasses and distant snow-covered mountain peaks.

Titlis Cliff walk 3,041 metres above sea level. 500 metres off the ground. 150 heart-pounding steps. This is what awaits you on the TITLIS Cliff Walk, the spectacular suspension bridge high up on the summit. To cross the bridge, you’ll need nerves as strong as the steel cables from which it hangs. On arriving at the summit, the route leads you through the glacier cave via an underground tunnel and on to the viewing platform at the south wall window. The suspension bridge stretches from here to the Ice Flyer glacier chair lift station. The TITLIS Cliff Walk is just one metre wide and over 100 metres long. The views into the abyss below are breathtaking! The Titlis Cliff Walk holds the record for being the highest suspension bridge in Europe.

The glacier cave is bathed in a dim turquoise-blue light. The air is so cold that tiny white clouds appear when you breathe. A magical world of ice awaits! This glacier cave forms the frosty heart of TITLIS. The ice here is up to 5,000 years old. The cave’s 150-metre-long walkway descends ten metres below the surface of the glacier. Exploring the glacier cave is a cool experience. The temperature inside the cave remains a frosty -1.5˚C. The cave can be easily accessed via a corridor from Level 1 of the TITLIS mountain station.

Titlis Glacier Park Snowtubing is the perfect sport for the young and young-at-heart. On your marks. Get set. Go! All kinds of exhilarating snow activities await in the glacier park in summer. Whiz down the snow toy run on one of our fun sit-skis, snake gliss or minibobs and let our magic carpet conveyor belt whisk you quickly and easily back to the top. Snowtubing is the ultimate alternative sledding experience which will see you skimming the glistening snow as you hurtle down the piste on a rubber tyre. You’re sure to spin full circle several times before reaching the end of this bumpy yet exhilarating ride. But don’t worry, our specially designed run will keep you safely on track. You and your friends can easily access the fun snow activities in the glacier park via the Ice Flyer chair lift.

Ice Flyer. Jaw-dropping views into a fascinating glacier world. Be sure to cast your eyes down into the impressive glacier world below. The Ice Flyer chair lift sweeps you smoothly and safely over crisp, virgin snow fields and icy depths. Some of the crevasses are up to twenty metres deep. Only here on TITLIS can you expect such a fantastic glacier experience. In the summer months, the Ice Flyer will fly you and your snow-loving friends from the mountain station to the TITLIS glacier park. And in winter, the chair lift will take you all the way up to the fantastic ski slopes on the summit.

Stotzig Egg Hike Panoramic views as far as the eye can see. The safe glacier trail to Stotzig Egg begins at the TITLIS Cableways summit station and leads to the Stotzig Egg vantage point. From here, you can look forward to spectacular views of the nearby and distant peaks that make up the Central Swiss Alps. In fine weather, you can even see as far as the Bernese Oberland, the mountains of Valais and the Black Forest. You will feel on top of the world! During the winter months (October – May), part of the hiking trail is on the ski slope. 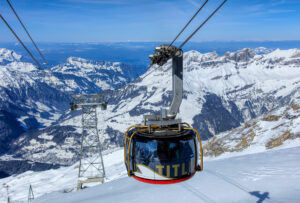 PARIS CITY TOUR-HD4 is a summary of entire Paris covering all sightseeings and will begin in one of the most scenic spots of the city, at the tip of this picturesque island, the perfect spot for picture taking. In a group size between 10 & 50 people, or in your very own Private group, start with a leisurely stroll along the Seine River to Pont Neuf, the oldest stone bridge in Paris. A simple glimpse will give you an idea of what makes this one of the most charming cities in the world. As you make your way to your river cruise you will stop at Sainte Chapelle with our skip the line exclusive access, Notre Dame, and the Conciergerie. Next, your Seine River Cruise! Embark on a relaxing sightseeing journey – a perfect way to unwind and enjoy the beauty of Paris. While enjoying the view, you will be given all detailed History of Paris to make your city tour more interesting. The tour will end at the Eiffel Tower. 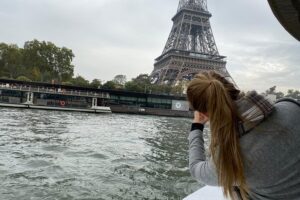 EIFFEL TOWER is a wrought-iron lattice tower on the Champ de Mars in Paris, France. It is named after the engineer Gustave Eiffel, whose company designed and built the tower. Locally nicknamed “La dame de fer” (French for “Iron Lady”), it was constructed from 1887 to 1889 as the entrance to the 1889 World’s Fair and was initially criticised by some of France’s leading artists and intellectuals for its design, but it has become a global cultural icon of France and one of the most recognisable structures in the world.[3] The Eiffel Tower is the most-visited paid monument in the world; 6.91 million people ascended it in 2015. The tower is 324 metres (1,063 ft) tall, about the same height as an 81-storey building, and the tallest structure in Paris. Its base is square, measuring 125 metres (410 ft) on each side.

During its construction, the Eiffel Tower surpassed the Washington Monument to become the tallest man-made structure in the world, a title it held for 41 years until the Chrysler Building in New York City was finished in 1930. It was the first structure in the world to surpass both the 200 meter and 300-meter mark in height. Due to the addition of a broadcasting aerial at the top of the tower in 1957, it is now taller than the Chrysler Building by 5.2 metres (17 ft). Excluding transmitters, the Eiffel Tower is the second tallest free-standing structure in France after the Millau Viaduct. The tower has three levels for visitors, with restaurants on the first and second levels. The top level’s upper platform is 276 m (906 ft) above the ground – the highest observation deck accessible to the public in the European Union. Tickets can be purchased to ascend by stairs or lift to the first and second levels. The climb from ground level to the first level is over 300 steps, as is the climb from the first level to the second. Although there is a staircase to the top level, it is usually accessible only by lift. 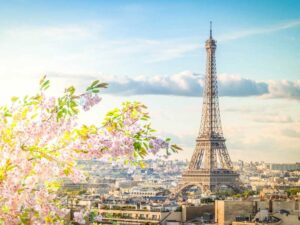 SEINE RIVER CRUISE tickets you can cruise along Paris’ riverbanks to see top sights like Musée d’Orsay. Glide underneath the city’s beautiful bridges and past its elegant architecture and visit attractions like the Eiffel Tower on your own. Perhaps hop off in Saint-Germain for a bite to eat at a sidewalk café or check out the Gothic architecture of Notre Dame. When you’re on the boat, relax and enjoy city views from the water. 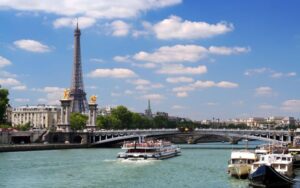 PRICE PER PERSON IN HALF TWIN

OUR DESTINATIONS
Your E-Mail address will not be posted or distributed and will be kept with us only for sharing monthly best offers and relevant news related to Travel.
ENQUIRE NOW